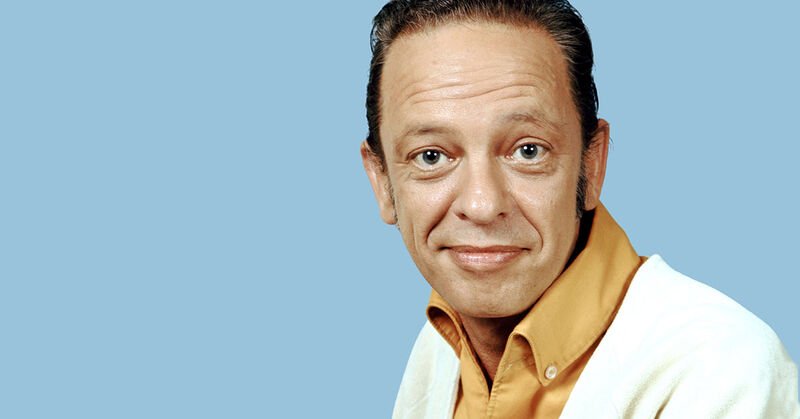 Don Knotts will forever be remembered as one of the most beloved comedians. He is best known for his high strung characters and high-pitched voice. His humor was so refined that even his daughter could not stay serious in his final moments. “‘I don’t want to be standing there in front of this man, my dearly beloved father, who’s dying, and laughing,” she said. But you’ll read about that soon.

He won three consecutive Emmys for his infamous role as Barney Fife in The Andy Griffith Show. Despite his popularity, Knotts kept his private life pretty much behind closed doors. However, following his death in 2006, a variety of interesting facts about the comedy legend was revealed. Continue reading for a quick look into Don Knotts’s fascinating life!

Even though Knotts eventually grew up to put smiles on people’s faces all over the world, his early life was far from simple. He struggled with life-altering issues during his childhood and teenage years, and you could sometimes see it in his eyes.

It can be shocking to discover some of the unexpected jobs that stars were working in before they made it big. Patrick Dempsey was a professional juggler before he became a famous actor. Rachel McAdams spent three years serving up Big Macs at her local McDonald’s.

However, Don Knotts’s profession before finding fame was especially strange. He worked as a chicken plucker. He had no idea he would end up making a fortune in a fulfilling acting career. So he was a coocoo. A coocoo plucker!

Started Off as a Ventriloquist

Like many successful comedians, Knotts explored the world of ventriloquy before landing major acting roles.

Knotts performed with the help of a wooden dummy named Danny “Hooch” Matador. Danny and Knotts worked together for a number of years until he ditched the doll during an overseas military show. Knotts decided ventriloquy wasn’t for him when he reportedly threw Danny overboard off the ship in the South Pacific. The doll was “missing in action,” he later joked in an interview.

When Barney Fife wasn’t dressed from head to toe in his infamous police uniform, he was rocking the iconic straw hat and coat. It wasn’t just the things he wore, though. Knotts’ expressive face quickly became recognized throughout the country as a killer comedian. Knotts’s unique look added a certain essence to his wonderful sense of humor.

The suit from The Andy Griffith Show became an icon of Knotts’s comedic persona and appeared multiple times in some of his other work, including The Reluctant Astronaut and The Incredible Mr. Limpet.

Knotts may have had a premature departure from The Andy Griffith Show, but the series truly left a substantial influence on his entire comedy career.

One of Knotts’s main subsequent roles following Barney Fife was featured in his first movie with Universal Pictures when he played Luther Heggs in The Ghost and Mr. Chicken. The hit 1966 film was actually based on a memorable episode in The Andy Griffith Show, 1963’s “Haunted House.”

Despite his unusual role in the military, Knotts was actually recognized as a highly decorated non-combatant. Knotts was discharged in 1946 after serving for three years.

Throughout his service, Knotts was awarded a number of honors. He received four notable medals, including the World War II Victory Medal, Asiatic-Pacific Campaign Medal, Honorable Service Lapel Button, and a marksmanship badge. He may not have fought in the front lines, but Knotts had a crucial and meaningful role of bringing smiles to the fighting soldier’s faces.

The Butt of Griffith’s Jokes

Despite maintaining a strong friendship throughout adulthood, Griffith and Knotts’ friendship was not always sunshine and rainbows. They surely had their ups and downs, especially while on set for The Andy Griffith Show.

Knotts was constantly the victim of Griffith’s practical jokes. According to biographer Daniel de Vise, Griffith often woke Knotts up from his naps by aggressively throwing a film canister onto the ground. Additionally, Griffith referred to Knotts by the name “Jess” – mocking Don’s given first name “Jesse” which he was known to thoroughly dislike.

A Unique Role in the Military

Conspiracy theories were quick to spread following Knotts’s devastating death. One of the many rumors included an urban legend that stated that Knotts once served in the United States Marine Corps as a fierce drill sergeant.

Fortunately, it’s only a myth. The only truth to the story is the fact that Knotts indeed served in the military, but he was far from an intimidating soldier. Throughout World War II, Knotts spent his time providing entertainment for troops in a variety act called Stars and Gripes.

Following his legendary stint in the military, Knotts landed his first major acting position in the TV soap opera Search for Tomorrow. Knotts’s character Wilbur Peterson only had a few lines in the show, but his role in the soap is still considered his first big break.

Knotts steered clear of dramas after playing that role and found his passion for comedy.  “It was the only serious role I ever played professionally,” said Knotts in an Archive of American Television interview.

After being featured on The Steve Allen Show from 1957 to 1960, he slowly began to rise to fame as the public picked up on his unique and showstopping sense of humor.

He landed his legendary role as Barney Fife in The Andy Griffith Show shortly after his appearances with Steve Allen. However, Knotts could have easily been kicked off the show after its first episode, considering he began shooting without signing any contract. Luckily, the executive producer Sheldon Leonard decided to let Knotts stick around when he displayed his incredible talent on-screen with Griffith.

Griffith Gave Him All of the Major Lines

Leonard wasn’t the only one impressed with Knotts’s acting in the show. While on set, Knotts’s co-star Andy Griffith was also blown away by his hilarious abilities.

Griffith had so much respect for Knotts’s wit that he let him steal the spotlight in the show. Andy was meant to be the star of the series, but he allowed Barney Fife to become the show’s comedic center instead. From the first episode, Griffith and Knotts began a strong friendship that lasted throughout their entire lives.

After five world-renowned seasons of The Andy Griffith Show, Griffith decided to continue on the same path and renew his contract with the producers for another three years. This shocked viewers all over the world, including Knotts. It was expected that the show wouldn’t gain enough popularity to last longer than five years.

Unfortunately, Knotts’s time on the series was over in 1965 when left to pursue a five-year contract with Universal Pictures. “It was a tough time for me because I enjoyed the ‘Griffith Show’ so much that I hated to leave,” Knotts recalled in an interview.

Knotts will be forever remembered for his first starring role as the hilarious character of Mr. Limpet in the hit movie The Incredible Mr. Limpet.

In this comical hybrid between live-action and animation, Henry Limpet transforms into a talking fish that helps the U.S. Navy locate Nazi submarines just before the attack on Pearl Harbour. The movie had its premiere on January 20, 1964, at the Weeki Wachee Springs Underwater Theater, becoming the world’s first underwater movie premiere. Knotts was proud of his work as Mr. Limpet, once mentioning the film was  “very very good.”

The series Three’s Company ended up being a hit show, but it didn’t have a simple rise to fame.

In 1980, contract negotiations sparked major drama on set. Suzanne Somers, one of the actresses in the show, had quite the extravagant request. She agreed to stay on the show if she was given a huge raise including 10% of the successful series’ profits. When her demands weren’t met, tension built on set.

He Often Took Over Somers’ Role During the Dispute

When the producers refused to grant Somers the increased salary, she went on strike. Somers refused to show up to film the show. The filmmakers feared the sudden loss of Somers would lead to decreased ratings of their show and eventually reached a compromise with her.

During Somers’s absence from the show in 1980, Knotts helped fill in the gap. He often filled in for her by reciting some of her lines of the character Chrissy.

Another Comedy Star Was Meant to Play His Role in Pleasantville

As the years went by, comedy evolved and Don Knotts evolved with it. He introduced himself to modern humor and younger audiences in the comedy-drama film Pleasantville that hit the box offices in 1998. Knotts had a supporting role as a strange TV repairman.

However, Knotts was real close to not landing the repairman role in Pleasantville. The act was initially meant to be performed by fellow comedy star Dick Van Dyke, who is famous for appearances in Bye Bye Birdy and Mary Poppins.

Overdubbed by Professional Impersonator in Pleasantville

Although Knotts was lucky to land an unforgettable role in Pleasantville as opposed to Van Dyke, he wasn’t totally present throughout the entire process.

After shooting had come to an end, the comedy star wasn’t available to return to set afterward for all of the extra dubbing sessions. Therefore, professional dubber and impersonator Craig Shoemaker was quick to take the challenging role of imitating Knott’s unique voice and style. Shoemaker had quite the comedy career himself as well, winning Funniest Male Stand-Up Comic at the American Comedy Awards in 1997.

Don Knotts passed away almost 15 years ago, but his beloved daughter strives to keep his name alive. She decided to follow in her father’s footsteps and pursue a career in acting and comedy.

When Karen was young, her protective dad was opposed to the idea of going down the path of the film industry. “‘No, that’s not a good life for a child,’” she recalled him saying. However, as she grew older, Don realized how passionate his daughter was about comedy and decided not to shield her from the world of acting. She admitted that he supported her one hundred percent in the end.

Tied Up in Knotts

Karen grew up to study acting at USC School of Cinematic Arts where she went on to explore the realm of stand-up comedy.

She has taken her one-woman show on the road and gone on tour all across the country performing her act Tied Up in Knotts. The act consists of reminiscing about her father’s legendary career in comedy, including scenes from The Andy Griffith Show and personal accounts about what it was like growing up with a famous comedian as a father.

It turns out Knotts’ showstopping sense of humor stayed alive along with him until his final moments. Even while on his deathbed, Knotts’ caused his daughter to break out into hysterics.

“He was literally dying, but he did something or said something that caused my stepmother and me to go into fits of laughter, which is why I ran out. I thought to myself, ‘I don’t want to be standing there in front of this man, my dearly beloved father, who’s dying, and laughing,’” Karen recalled with a smile.

Knotts’ death was devastating to all those who were touched by his witty humor and memorable smile. Comedians from all over the world will forever be inspired by his enchanting charisma and untethered personality.