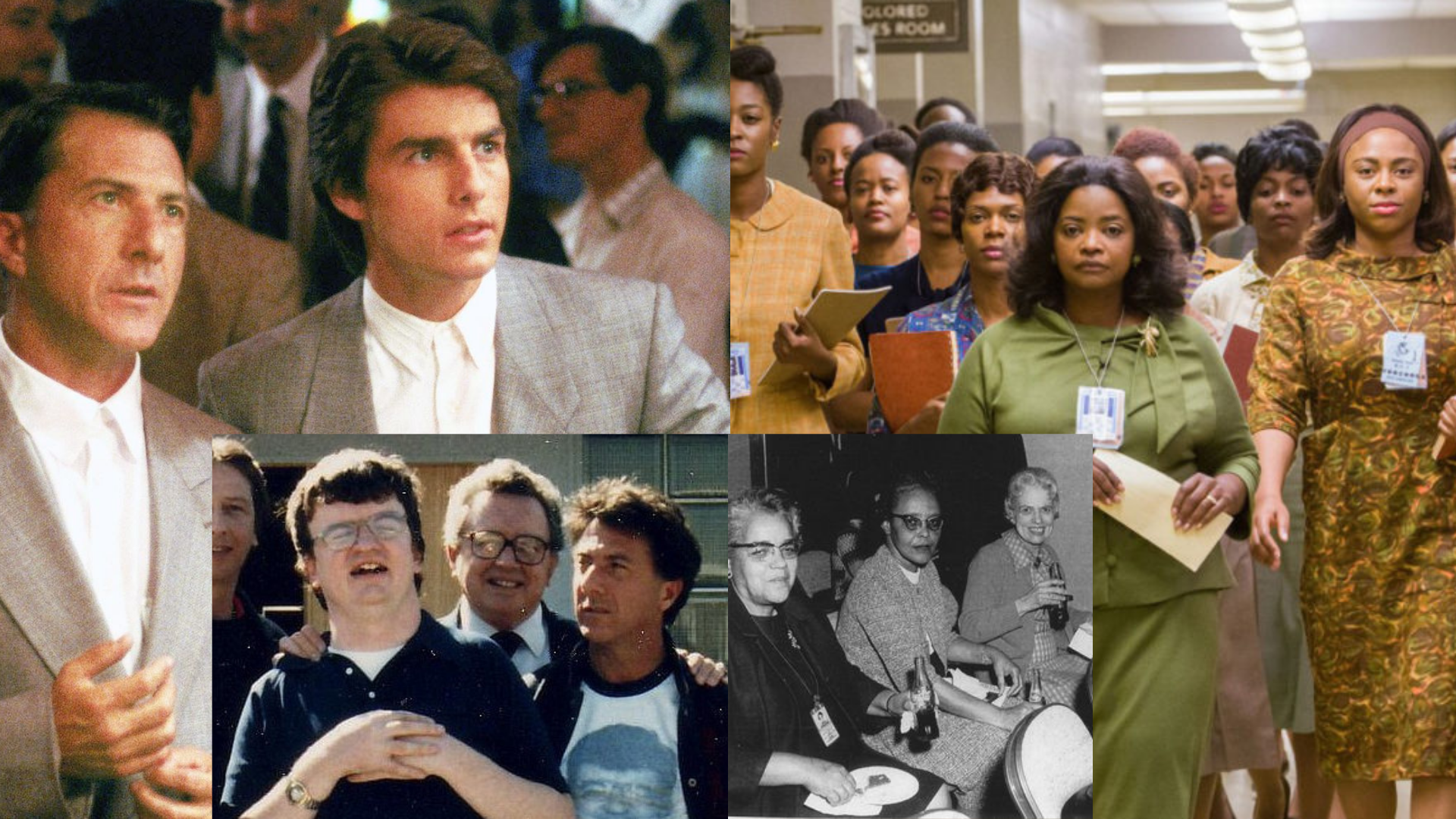 Loosely based on the 2016 non-fiction book of the same name by Margot Lee Shetterly about African American female mathematicians who worked at NASA. The movie depicts the mathematicians Katherine Johnson (Taraji P. Henson), Dorothy Vaughan (Octavia Spencer), and Mary Jackson (Janelle Monáe) as they fight widespread, systematic discrimination and racism during the 1960s, playing a vital—and unsung—role in the effort to win the Space Race.

Dorothy Johnson Vaughan passed away on November 10, 2008. In 1949, she became acting supervisor of the West Area Computers.

Mary Jackson passed away on February 11, 2005. After 34 years at NASA, Jackson had earned the most senior engineering title available.

Based on Chris Gardner’s true story. The movie follows a homeless salesman (Will Smith) who raised his son while aspiring to be a stockbroker. A heart-wrenching film, The Pursuit of Happyness details how one man battled with losing his home, learning a new career, and kept his son in good spirits through their harsh situation.

In 1987, Gardner established the brokerage firm, Gardner Rich & Co. and he is now an accomplished motivational speaker as well.

“Hachi: A Dog’s Tale” is an American drama film adaptation of the 1987 Japanese film “Hachikō Monogatari.” The original Japanese film depicted the true story of an Akita dog named Hachikō who lived in Japan in the 1920s. Hachikō is remembered for his incredible loyalty to his owner, Hidesaburō Ueno, for whom he waited at the Shibuya train station, where he usually welcomed his owner, for over nine years following Ueno’s death.

Inspired by the American savant Laurence Kim Peek, Rain Man is the story of car dealer Charlie Babbitt (Tom Cruise), who discovers his recently deceased father left his $3 million fortune to the mental institution where his estranged brother lives. Initially motivated by money, Babbit checks his brother Raymond (Dustin Hoffman) out of the institution to return to LA. Without knowing, Babbit’s greedy actions embark them on a life-changing road trip.

The inspiration for the character Raymond Babbitt in the 1988 movie, Kim Peek, passed away on December 19, 2009. The Utah Film Center’s Peek Award is meant to honor his legacy.

With many film adaptations, The Walk is based on the story of 24-year-old French high-wire artist Philippe Petit’s walk between the Twin Towers of the World Trade Center on August 7, 1974. As a boy, Philippe Petit dreamt of performing incredible stunts to dazzle the crowds. As an adult (Joseph Gordon-Levitt), his dreams became true when he chose the career of a high-wire artist. Under the guidance of his mentor “Papa Rudy”, the French daredevil, he was able to accomplish the stunning feat of high-wire walking between the Twin Towers.

After the years of his first daredevil acts, Petit now lives in New York, where he is an artist-in-residence at the Cathedral of St. John the Divine, a location of other aerial performances.

This film is a French buddy comedy-drama film depicting the story of a Parisian aristocrat, quadriplegic since a paragliding accident, who hires a young man to be his live-in caretaker. Although both men are quite different, they bond and develop a deep friendship.

The plot of the film is based on the true story of Philippe Pozzo di Borgo and his French-Moroccan caregiver Abdel Sellou. Philippe is a Corsican French businessman e Director of Pommery and was the owner of an inherited historic hôtel particulier in Paris used as a function hall.

An ultimate classic. James Cameron’s “Titanic” is an epic romance film taking place in the ill-fated maiden voyage of the R.M.S. Titanic. Though the romantic relationship starring the movie is fictional, the Titanic was truly the most luxurious liner of her era. Operated by the White Star Line, the Titanic sank in the North Atlantic Ocean on 15 April 1912, after colliding with an iceberg during her maiden voyage. Over 1,500 of the 2,224 passengers perished in the incident.

In December 2004, a loving family was visiting Thailand to celebrate their winter vacations. Maria (Naomi Watts), Henry (Ewan McGregor), and their three sons begin their find themselves in a nightmare the day after Christmas when a wall of black water rises from the sea devouring everything in its path. Though the family faces their darkest hour, unexpected kindness, and courage they didn’t know they had, win the day.

As fantastical as it may sound, the film is based on the experience of María Belón and her family in the 2004 Indian Ocean tsunami. The 2004 Indian Ocean earthquake occurred at 07:58 (UTC+7) on December 2006. It was an undersea earthquake that registered a magnitude of 9.1–9.3. The earthquake was the third-largest ever recorded and the following tsunamis it caused wrecked havoc across 14 different countries.

During the late 1960s, the city of San Francisco was being haunted by a serial killer called Zodiac. Investigators and reporters come together to reveal the killer’s identity and bring him to justice. However, Zodiac claims victim after victim and taunts the authorities with cryptic messages, ciphers, and menacing phone calls.

Based on the real like Zodiac killer, the movie does a fair work of portraying the fear many of the San Francisco residents felt. Unfortunately, the serial killer was never found. His cipher had become so complex, it wasn’t until December 11, 2020, that his last cipher was resolved.

In the end, all of these are stories and precedence of how amazing and yet daunting our world can be. So wether you are looking for some heart-warming stories to the most horrifying of tales, maybe next time you should look for them around you.